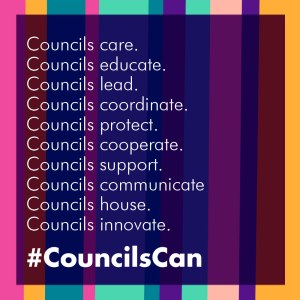 Today you will see various local government accounts tweeting #CouncilsCan, as part of an annual day-long effort co-ordinated by the Local Government Association to highlight the work that councils do. Over recent years we’ve seen practically every cause allocated a ‘day’, ‘week’, ‘month’, and even ‘year’ dedicated to raising awareness or encouraging activity around a given cause. The timing of ‘Councils Can’ day isn’t randomly selected, with the Government’s Spending Review due to be announced on the 25th November, local government is trying to remind people what we do and how little will remain if we’re forced to go through another decade of cuts.

Local government provides around a quarter of all public services. Even before austerity, local authorities were rated the most efficient part of the UK’s public sector and since then we’ve faced the harshest cuts. At peak, Crawley Borough Council had £27m net revenue expenditure, post-COVID it’s down to around £12m. I cannot think of any other organisation in the public or private sector which could maintain its output as well after losing 56% of its revenue.

It is councils which have led the efforts to tackle the spread of COVID-19 on the grounds and to ensure the needs of the community were met through the crisis and despite the promises of the government at the time, we have yet to be compensated for the gap the pandemic has left in the council’s finances. With Crawley Borough Council already being forced to make its first real cuts in six years and a lockdown now set to decimate council finances further, I think it’s fair to say that #CouncilsCan, but for how much longer?