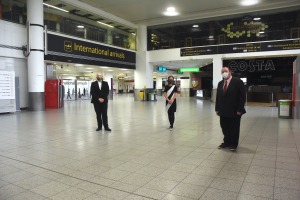 With so much of the local economy connected to aviation, it is predicted that the coronavirus pandemic will lead to higher job losses in Crawley than any other town. Thousands of redundancies have already been announced at major local employers such as Virgin Atlantic, Easyjet, and Swissport, while some companies such as British Airways have used the crisis as an opportunity to impose drastic changes to working conditions.

For months, local politicians, businesses and trade organisations have been calling for Government action to avoid mass unemployment and to rebuild Crawley’s economy – so far without success.

From the start of August the furlough support scheme will only cover 60% of a worker’s salary. With Government flight restrictions severely limiting the ability of the sector to compete, many employers will have to choose between maintaining a payroll they can no longer afford or making big cuts to their local workforce. The Government has to act now to save Crawley’s jobs.

“Sectors hardest hit by Covid-19, such as aviation, need their own deal to protect jobs and working conditions. Labour has already set out a six-condition plan for aviation which would save thousands of jobs connected to the sector in Crawley, while forcing companies to clean up their act on tax avoidance and the environment.”

“I’m very grateful to the Shadow Chancellor for meeting us today and lending her support to our call that the Government acts now to save local jobs and protect working conditions. We are just days away from the furlough scheme winding down, the Government can’t afford to delay any longer.”

“This isn’t just an issue for the area immediately surrounding Gatwick, many industries and jobs are linked to the airport right across the region, including all of West Sussex.

“We must also fully support those campaigning to stop companies like British Airways trying to force through the rehiring of their remaining workers on worse terms and conditions.  It’s massively unacceptable for the Government to allow anyone to use the furlough scheme and then act in this way, which is why locally we are backing the aims of the BA Betrayal campaign one hundred percent.”