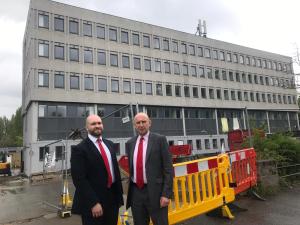 Labour will scrap developer ‘get-out clause’ which has led to the loss of over 10,000 affordable homes

Permitted development rights introduced since 2013 allow developers to bypass the normal planning process by converting commercial spaces into housing without the consent of the council and local community. This gives developers a get-out from requirements to provide affordable housing and meet basic quality rules such as space standards creating ‘rabbit hutch’ flats.

These Conservative changes were introduced to boost house-building numbers, but the measures mean housing units just a few feet wide in former office blocks are now counted in official statistics as ‘new homes’. There are 42,000 new housing units that have been converted from offices since 2015.

Research by the Local Government Association has estimated that over 10,000 affordable homes have been lost as a result of permitted development in the last three years alone.

“To fix the housing crisis, we need more genuinely affordable, high-quality homes. This Conservative housing free-for-all gives developers a free hand to build what they want but ignore what local communities need.

“Labour will give local people control over the housing that gets built in their area and ensure developers build the low-cost, high-quality homes that the country needs.”

“In Crawley, perhaps more than anywhere else, Permitted Development is creating havoc in local neighbourhoods and robbing public services of the money they need to adapt to new housing. When I met with the Conservatives’ Housing Minister to discuss the damage his policy was causing to Crawley he spent the meeting playing with his phone rather than listening to the concerns of residents. Labour have listened and are backing local Crawley residents, rather than helping developers to fill their pockets at the cost of our community like the Conservatives.”