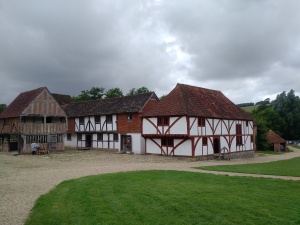 Upper Hall, once found in Northgate, has retired to a life in the country at the Weald and Downland Museum.

Genuine ideological differences do exist in politics and that means disagreement is sometimes inevitable. At other times, such as at Full Council meetings, there may be more smoke than fire to the argument. However, there is often more negotiation and co-operation taking place behind the scenes than I think most people realise.

One of the means through which such co-operation is facilitated locally is the West Sussex Leaders Board, a quarterly meeting of all the leaders of councils within the county.

Today we, unusually, met away from a council building, at the Weald and Downland Museum. The museum is an open air collection of very old Sussex buildings which I hadn’t visited since I was sent on a History enrichment course there whilst at Holy Trinity.

The building in which we met was referred to as Crawley Hall, having stood on the Northgate-side of the High Street until it was relocated in the early 1970s.

While it would be wrong to go into the exact topics of discussion, at board meetings we work to address issues which affect our areas and where solutions cannot be found on a single-authority basis. Issues like delivering improvements to rail capacity and addressing our collective skills deficit. If nothing is done, such issues have the potential to become huge problems in each of our localities and consequently despite being the only Labour leader out of seven councils there is often considerable agreement on what needs to be done to improve the lives of our residents.

The Government may no longer be signing-off devolution deals, but so long as we continue to tackle our collective problems collectively we will achieve more than we achieve alone.